According to a recent Gallup survey over half of the population wants to lose weight. Are you part of that statistic? If you are – you need Lipodrene Elite to help you meet your weight loss goals! Lipodrene Elite is one of the strongest weight loss aids on the market.* It uses all natural ingredients to help you shed those extra pounds.*

One of the main ingredients in this weight loss supplement is coca extract which contains alkaloids. Coca alkaloids are unique because they have the ability to cause the body to release norepinephrine, dopamine and serotonin. These three neurotransmitters are naturally occurring in the body on a regular basis but coca alkaloids increase that release. Having an increased amount of these neurotransmitters is essential for weight loss.*

The first neurotransmitter impacted by coca alkaloids is serotonin. Serotonin is commonly known to elevate your mood. However, it is also an appetite suppressant*. Secondly, dopamine helps control the brain’s reward and pleasure centers as well as regulate movement and emotional responses. In terms of weight control dopamine tells the body when to stop eating.* Finally, Norepinephrine, known as part of the adrenaline family, is essential to “fight-or-flight.” It can help relieve pain symptoms, support memory functions, and focus.* Unfortunately many people do not produce enough norepinephrine. People who do not have enough of this neurotransmitter never feel full and they crave starchy foods.* They can feel exhausted, depressed and even have attention difficulties.* By increasing these three neurotransmitters you are not only giving your body the fuel to lose weight, but you are igniting them in order to start melting away those extra pounds.*

Senegalia Berlandieri Extract: This plant is often used to improve mood and intensify energy levels.* It works by increasing the amount of dopamine and adrenaline in your body.* Dopamine is the chemical released when you are happy and in a good mood. iIt directly impacts your reward and motivation center of the brain. Adrenaline is a hormone released by the adrenal glands during times of stress. It helps blood circulation, breathing rate and speeds up metabolism.* When your metabolism is raised you are more likely to lose weight quicker.

2-Aminoisoheptane HCl: This plant-based ingredient can be found in many supplements due to the fact that it’s known to boost your energy levels and curb your appetite.* It will help you stay focused during the day while also being a powerful appetite suppressant.*

Citrus Aurantium: This herbal supplement is also known as “bitter orange.” It is used to treat constipation, improve energy, and to calm one’s nerves.* It also helps to stimulate the alpha and beta cells that help break down fat in the body.* The body responds to Citrus Aurantium by having a thermogenic response. This means that the central nervous system is stimulated which can lead to weight loss*

Green Tea Extract: Green tea is known for its many health benefits such as easing depression, improving mental alertness, reducing inflammation, and treating headaches.* Green tea is full of antioxidants. In this case the green tea will help aid in mental alertness throughout the day as well as speed up the body’s natural metabolism.* Green tea consists of two major compounds: caffeine and catechin. Caffeine helps to increase energy and mental alertness while catechin can help to break down excess body fat.* In turn, the body uses this fat to increase metabolism and speed up your weightless journey.*

Theobromine: Most commonly known to be found in tea leaves and the cacao plant (and therefore in our chocolate), this herb is known to give a little boost after consumption.* Theobromine is a naturally occurring stimulant is very similar to caffeine. It has been used since Ancient times by the Aztecs, who regarded it as the “food of the gods.” It’s associated with not only an increase in energy, but also an increase in urine production.* This increased level of urine flow removes toxins from your body at a quicker pace.*

Caralluma Extract: Caralluma is a cactus from India that, when taken orally, decreases your hunger and appetite.*

Narigen: Naringen is naturally occurring in citrus fruits and known to be full of antioxidants as well as be an anti-inflammatory.* It increases the metabolic rate and leads to weight loss.*

Dihydroxybergamottin:Also known as bergamottin, this organic compound can be found in citrus fruits as well as dairy products. It has positive effects on the liver and aids in removing toxins from the body. *

L-Hydroxytryptophan: Commonly known as 5-HTP, this chemical (produced from the seeds of an African plant) increases serotonin levels in the body. These increased serotonin levels affect sleep, appetite, and mood.*  Increases in 5-HTP can lead to a better night’s sleep, reduced appetite, and a more pleasant overall mood.*

Yohimbe Extract:Yohimbe is an evergreen tree that can be found in Central Africa. It contains a chemical called yohimbine which has been used for medical purposes for hundreds of years. It is used for a variety of purposes, but more commonly for weight loss, increased athletic performance, and a boost in energy levels.* It is known to increase blood flow as well as help the release of serotonin.* Again, serotonin levels are essential for appetite control and mood regulation.

It is obvious that the natural ingredients in Lipodrene Elite will not only help you feel better, but help you look better too!* If you are ready to start, or accelerate, your weight loss journey then start with Lipodrene. 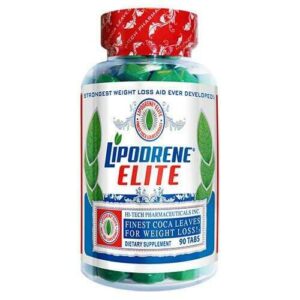